Posted by Nicholas Schmidt on 1/30/2015 to Motorcycle News 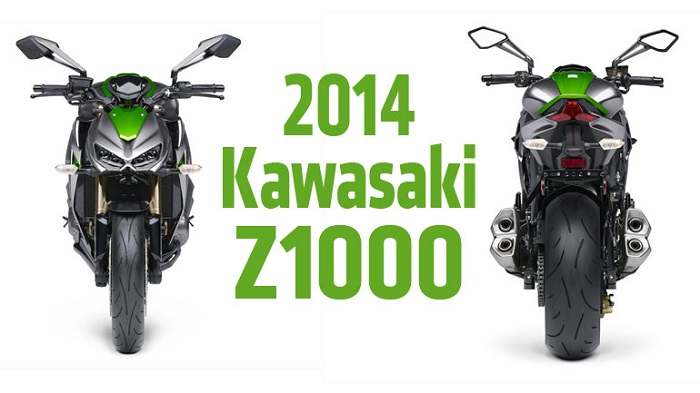 For years now I have been saying that riding Naked is the only way. It seems that some of the motorcycle companies have listened, with more and more of them coming out with naked bikes and more upright riding positions. We like to think of it as a Streetfighter. the Streetfighter scene or Naked bikes as the US calls them, were born out of the need to simply and make our bikes our own.
In the early 90's the bike to convert into a streetfighter was the early GSXR's. These bike lend them to being stripped down to the bare minimum while still being asthestically pleasing to the eye. As the sportbike scene grew, more and more bike were being covered up by plastics. Several companies saw the naked bike market early on with the introduciton of the Ducati Monster, Suzuki SV650 & SV1000, Kawasaki Z1000 and the Yamaha FZ-1.
This new 2014 Kawasaki Z1000 is bringing back the naked bike with a vengeance. With it's aggressive styling, sportbike like handling and the power of a liter bike, yuo can bet this is one hell of a bike. Be sure to go check it out and even test ride one if you can. 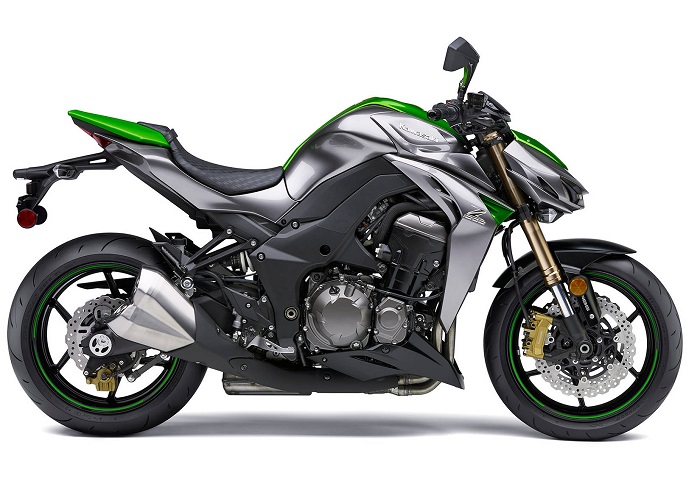 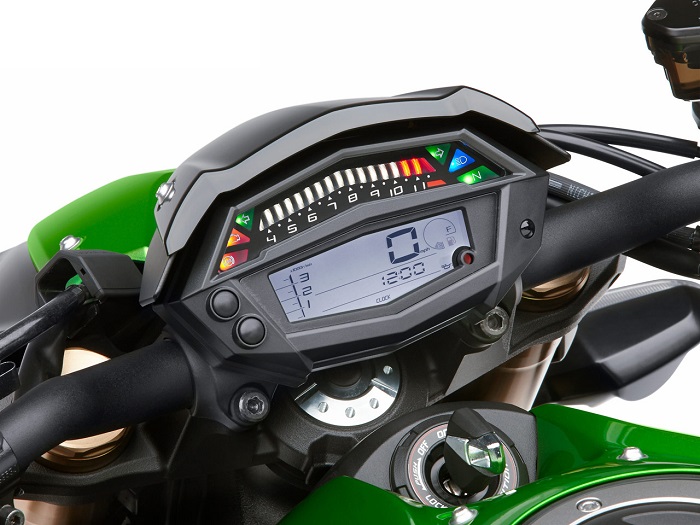 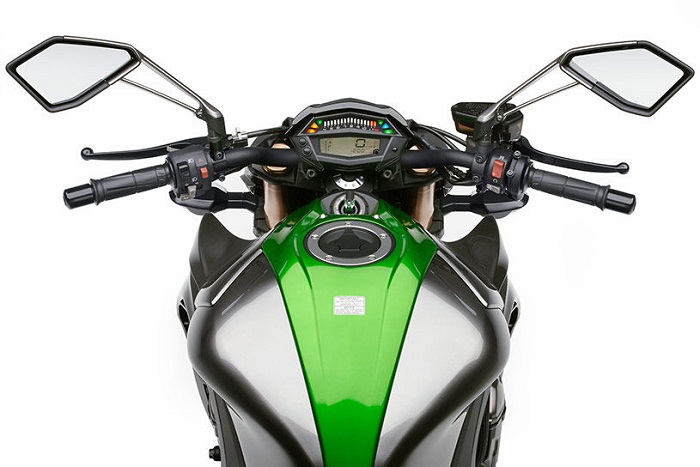 Posted by Administrator on 1/26/2015 to Product Reviews
Are you looking to relpace those old rusted heaving sprockets & chani on your vintage Honda? Well we have the solution for you. We are proud to introduce our 520 Sprocket & Chain conversion kits for the Honda CB350, CB360, CB400, CB450 & CB750's. The 2 main advantages of uses these kits is that you can now run a modern O-ring or X-Ring chain without hitting the engine case and you reduce your rotating mass substantially. 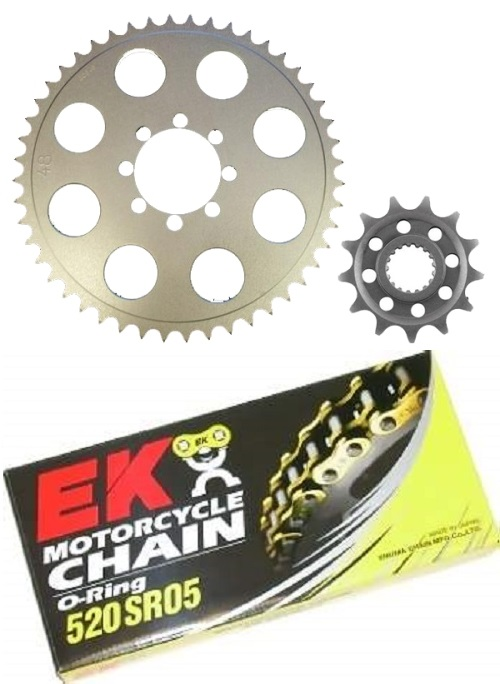 For all you CB350 & CB450 guys, this weight reduction in the rotating mass translates to more power on the trac or street. We have several sponsored riders in AHMRA running our 520 Sprocket & Chain conversion with great success. One of these racers is Cindy Hill of Norton Manx Racing who is running a CB400F with our kit. 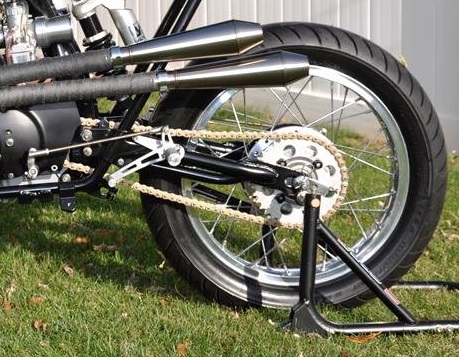 Posted by Nicholas Schmidt on 1/21/2015 to Product Reviews
The Arrow GP2 exhausts were derived directly from Arrow’s MotoGP World Championship exhaust systems.These were bought to the market to satisfy the needs of motorcyclists wanting to buy a discreet race inspired design.GP2 exhausts are currently only available as slip-ons (silencer & mid pipes) and are designed for maximum weight reduction, impressive power gains and race inspired sound.
http://moto-madness-com.3dcartstores.com/Arrow-GP2-Dark-Edition_c_353.html
The Arrow GP2 Dark System is constructed of stainless steel and used a black powder coated sleeve that features a specially designed Arrow GP laser etched logo.Although the GP2 exhausts are race inspired, their design offers the option of adding a dB killer allowing tonal control of your exhaust system.This piece is specially designed for these silencers and are sold separately.
The quality that we have come to expect from Arrow Exhaust is nothing but outstanding. This GP2 exhaust is no exception. High quality materials, precision tig welded and outstanding finish on all their systems. 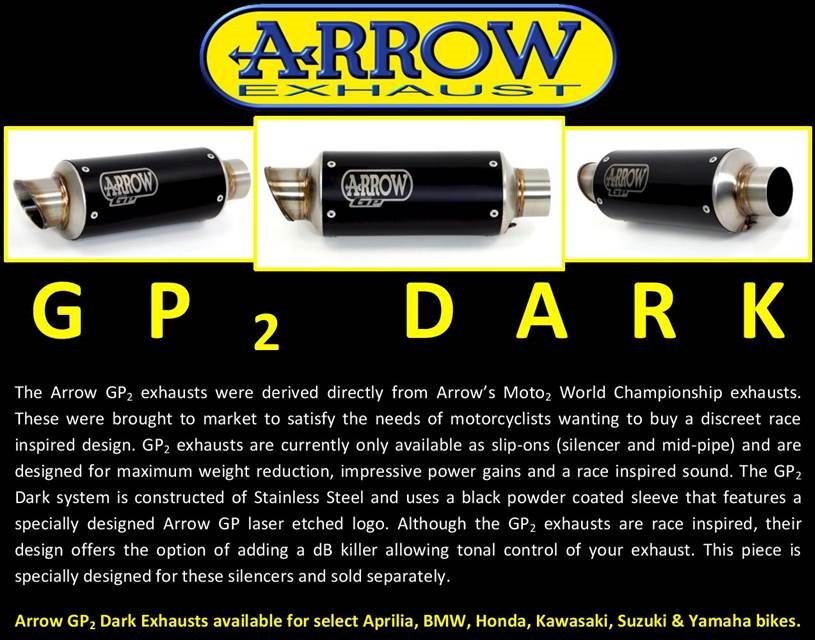 Posted by Nicholas Schmidt on 1/21/2015 to Product Reviews
Driven Racing USA has realy stepped up the motorcycle parts game over the last few years. With the release of their Driven D-Axis product line, Driven has invested 100's of thousands of dollars in new equipment, research and development. This investment has paid off with nothing but spectacular results and high end products.
One of the best Driven products to come out of this is their Driven D-Axis & TT Style rearsets. The Driven Racing D-Axis rearsets were designed to offer almost infinite adjustment abilities to suit your riding style. The Driven Racing TT rearsets are a track / race inspired design which has been tried and proven.
Checkout all the Driven Racing Products here. www.moto-madness.com 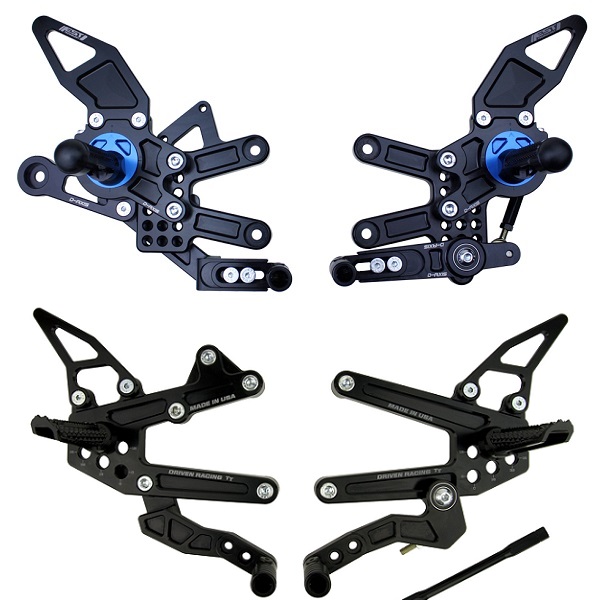 Posted by Nicholas Schmidt on 1/21/2015 to Motorcycle News
KTM Motorsports has released the all important detail about their KTM RC 390 Cup Racebike. The Bikes will be available to purchase at a price of $9,999.99 by the 2015 RC Cup Series, which is a 5 round series in conjunction wuith the 2015 MotoAmerica Racing Series.
Full article on http://www.roadracingworld.com/news/ktm-releases-details-on-rc-390-cup-racebikes-for-motoamerica-series/

As stated by KTM Motosoprts, The highly-anticipated RC Cup Series will allow riders between the ages of 14-22 years old holding an AMA Superstock Limited license to participate. All riders must race aboard 2015 KTM RC 390 Cup Racebikes. These motorcycles are designed as racing competition bikes (not street-legal) and have been prepared by KTM with over 40 PowerParts and other enhancements to increase racing performance. Some of the new features include: 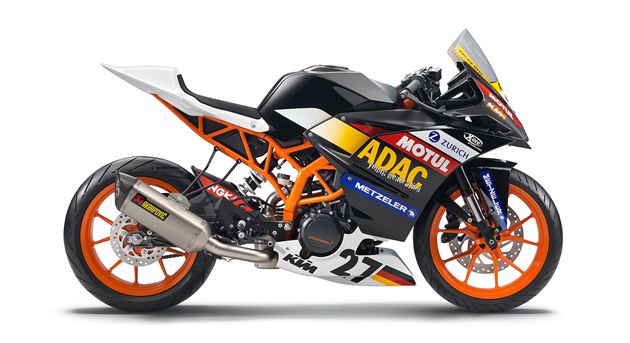 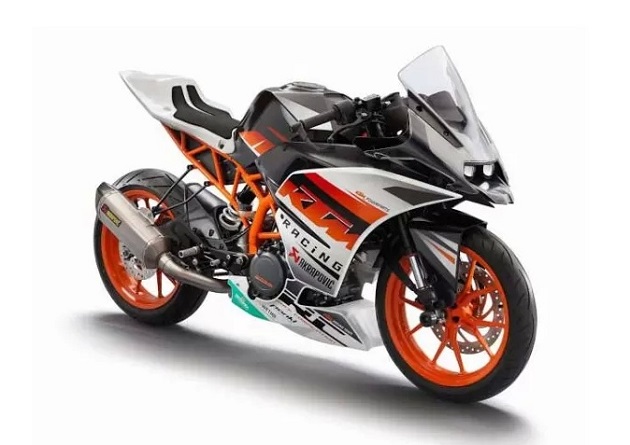 Posted by Administrator on 1/20/2015 to Motorcycle News

Café Racer TV is back with an all new format with a show called Naked Speed hosted by non other than Bryan Fuller of Fuller Hotrods & Mike Seate.  Naked Speed is a new format for all things with a motor and wheels.  Mainly focused on Motorcycles & Café Racers, it will also feature custom car builds and more.

Premieres on Wednesday January 28, 2015 on the Velocity Channel

Posted by Nicholas Schmidt on 1/20/2015 to Product Reviews

The Motogadget M-Blaze Disc Barend Turn Signal is the lastest generation of turn signal lights from Motogadget. The characteristics feature of the LED turn signals is the transparent light emitting disc on a compact aluminum base providing the harmonious finish of the handlebar end.

This is already the third generation of Motogadget turn signals using the Motogadget patented TranzLight-Technology. This progressive approach to development is not limited to the miniaturization of turn signals casing. Furthermore, it creates new lighting concepts directly through a crystal like plastic body. Only the precision CAD calculations and state of the art manufacturing processes allow this new design and its performance opportunities. If you are looking for form and function in a turn signal then look no further than Motogadget's line of M-Blaze turn signals. Outstanding quality with exceptional functional is unmatched in the industry. 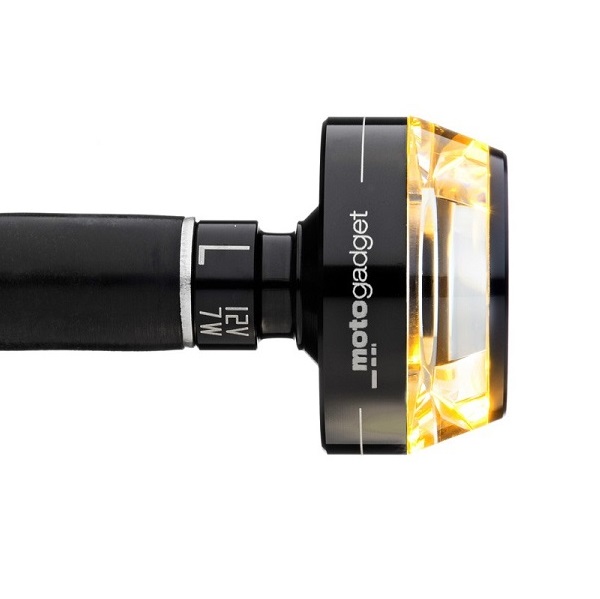 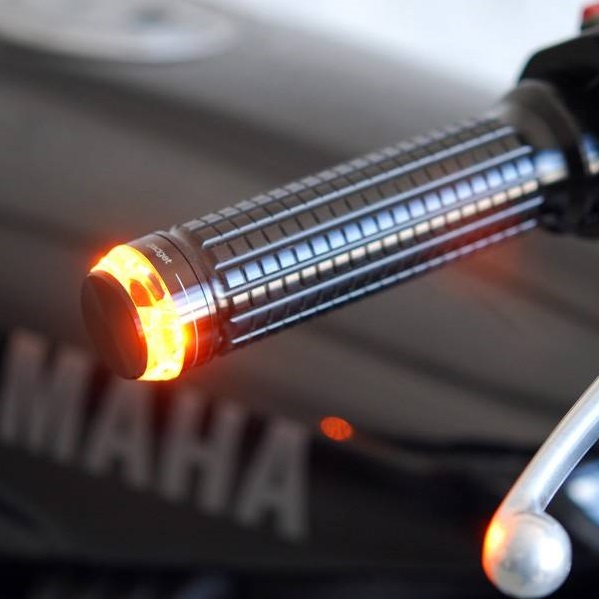 Posted by Administrator on 1/19/2015 to Product Reviews

Core Moto has joined the motorcycle brake industry and has taken it by storm.  Core Moto Full brake line kits Front and rear lines with all bolts needed anodized to match the banjo color you specify. In our opinion this is the kit to get and that's why you'll see it on our shop bike on the main page! Core Moto quality is some of the best we have ever seen.

Not only does Core Moto produce OEM fornt & Rear brake line kits, but they will custom make lines for us to your specs.  We currently have several Stunt Riders that we sponsor using Core Moto Lines they we have had custom built to their bike.  Some of the riders currently using these lines are Combat Barbie and Gstodd Stunts (Gary Stoddard.) These lines were built with precision specs and outstanding quality we have come to expect from Core Moto. 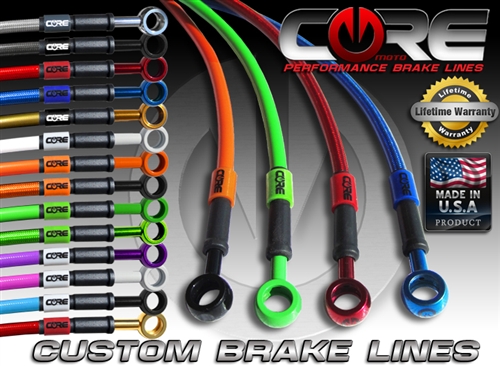 Core Moto lines are made to highest quality standards in the industry and use to highest rated materials.  Each line comes backed by their lifetime warranty and 100% made in the USA.

CHECK OUT OUR SELECTION OF CORE MOTO BRAKE HERE -- CORE

The Motogadget M-Unit V.2 is a digital control unit for your motorbike the 'heart' of the vehicle's electrical system. The m-Unit V.2 can be operated by push-button control or conventional switch controls mounted at the handle bar. The control box is used for switching of all necessary vehicle components and doubles as fuse panel. Its compact case has the approximate size of a cigarette box and is completely moulded in - resistant to water, weather and vibrations.  It is easily mounted by two M5 screws. All cable connections are made using terminal blocks.
The m-Unit V.2 is the 'electrical heart' of the motorbike. All switching operations are completely digitally controlled by a microprocessor and the latest solid-state technology - completely without mechanical relays, taking vehicle electrical systems to a new level!